Keep your Poms safe in summer

At Arlington, each soldier has a special lady

This story really touched my heart. What a wonderful service these ladies are doing to ensure no one is forgotten at the time of their death. 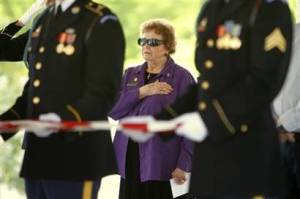 By HELEN O’NEILL
The Associated Press
updated 6:45 p.m. CT, Sat., May 29, 2010
ARLINGTON, Va. – Joyce Johnson remembers the drums beating slowly as she walked with her girls from the Old Post Chapel, behind the horse-drawn caisson carrying the flag-draped casket of her husband.

She remembers struggling to maintain her composure as she stared at his freshly dug grave, trying not to dwell on the terrible sight in the distance — the gaping hole in the Pentagon where he had so proudly worked.

The three-volley salute. Taps. The chaplain handing her a perfectly folded flag. The blur of tributes.

And then a lady stepped forward, a stranger, dressed not in uniform but in a simple dark suit. She whispered a few words and pressed two cards into Johnson’s hands.

“If there is anything you need …”

Then she melted back into the crowd.

Later Johnson would think of her as a touchingly, human presence in a sea of starched uniforms and salutes. She would learn that the stranger was an “Arlington lady” — one of a small band of volunteers, mainly spouses of retired military officers, who attend every funeral in Arlington National Cemetery. She would read the notes — a formal one from the Army Chief of Staff and his wife, and a personal handwritten one from the Arlington lady herself.

She would learn of their mission: to ensure no soldier is buried alone.

Johnson wasn’t alone. In fact she felt as though an entire nation was grieving with her.

But she never forgot the kindness of her Arlington Lady.

And several years later, as she wrestled with how to best to honor her husband, she dug out the lady’s card. This is something I can do, she thought, not just for him, but for every soldier.

“It doesn’t matter whether we are burying a four-star general or a private,” says Margaret Mensch, head of the Army ladies. “They all deserve to have someone say thank you at their grave.”

Mensch is sitting at her desk in the basement of the cemetery’s administration building in the cramped office shared by ladies from the Navy, Air Force, Army and Coast Guard. The place bustles with activity — young military escorts in dress uniform arriving to accompany ladies to funerals, chaplains scribbling eulogies in their tiny office across the hall, cemetery representatives ushering mourners into private rooms upstairs.

30 funerals each weekday
There are approximately 30 funerals in Arlington every weekday and the ladies attend every one. All have their own reasons and stories.

There is Mensch, married to a retired Army colonel, who oversees the mammoth task of organizing the schedules for her 66 Army ladies and who says attending the funerals is the greatest honor of her life. And Doreen Huylebroeck, a 63-year-old nurse who remembers how desperately she wanted an Arlington lady beside her when her own husband, a retired Navy officer, died three years ago. Janine Moghaddam, who at 41 is one of the youngest Arlington ladies, and who felt a desperate need serve her country in some small way after Sept. 11, 2001. And Johnson herself.

She treks to the cemetery in spring when cherry blossoms burst over the rows of white stones and everything seems dusted in yellow pollen. And in the swelter of summer when the stones blaze in the heat and mourners sometimes pass out at services. Even in winter, when the wind whips through the marble pillars of the Columbarium, Johnson and the other ladies keep their vigil, clinging to the arms of their escorts as they pick their way through the mud and snow.

Always elegantly dressed, often in hats and gloves. Always standing, hand over heart, a respectful distance from the grave. Always mindful of history.

The ladies know every inch of Arlington’s 624 manicured acres, from the stones of freed slaves marked “unknown citizens” to the grave of the first soldier interred here (Private William Christman, a farmer from Pennsylvania who fought in the Civil War) to Section 60, where the men and women who lost their lives in the current wars are buried.

“So many stones, so many stories,” says Paula Mckinley, head of the Navy ladies, as she drives through the cemetery one recent spring day, stopping at a section not far from the throngs of tourists at President John F. Kennedy’s grave.

Baldwin. Curtis. Sanchez. She walks among their headstones reciting their names.

With her booming voice, red hair tucked under a straw hat, and brisk manner, Mckinley, whose husband is a retired Navy officer, is a striking figure. But she is subdued by the graves, reverential. “They all deserve to be remembered, and to be visited,” she says.

McKinley, who has been an Arlington lady for 21 years, drives a little further. She stops by a grove of willow oaks, searching for a specific plot.

“Here you are, sweetheart,” she says, gently touching the stone of a young woman Navy officer who died in an accident at the age of 25. The officer’s mother called from California one day — on her daughter’s birthday — and asked if an Arlington lady could put flowers on the grave. Now McKinley visits regularly. She says it’s the least she can do.

Job to honor, not grieve
The first group of Arlington ladies were formed in 1948 after Air Force Chief of Staff Gen. Hoyt S. Vandenberg and his wife, Gladys, noticed an airman being buried without any family members present, just a chaplain and honor guard. It seemed so sad, and somehow so wrong. So Gladys Vandenberg enlisted a group of officers’ wives to attend all Air Force funerals. The other branches of the armed services followed, with the exception of the Marines, who do not have a group.

The ladies insist they are not mourners. They come to honor, not to grieve. “An Arlington lady doesn’t cry,” is practically a mantra.

And yet, there are times when that is inevitable.

McKinley remembers choking up as she offered condolences to a 10-year-old girl, who had just lost her parents. The child reached up and hugged her tight. And the time a young widow from Peru clung to her, begging McKinley to sit next to her in the front row. Her husband had died suddenly and there were no family members to comfort her.

Linda Willey, head of the Air Force ladies, describes the pain of burying friends from the Pentagon after September 11, 2001, when shards of debris still littered the cemetery and tears flowed freely behind dark glasses.

And Mensch tells of the heartache the Army ladies felt last year when one of their own escorts was killed in Iraq. The handsome young soldier from the 3rd Infantry Division, who had escorted the ladies to hundreds of funerals, was buried with full military honors, an Arlington lady standing by his grave.

About 145 ladies volunteer in the four branches, which all have slightly different rules. The Army ladies maintain a strict dress code — no slacks, no red, panty hose to be worn at all times. The Navy ladies introduce themselves to the families before the funeral, and follow up with personal notes about six weeks later.

All of the ladies volunteer for one day a month, sometimes attending four or five funerals in a single day. All have memories and stories: the time a family feud erupted and police had to break up the mourners; the young widow who wore a red cocktail dress because it was her husband’s favorite; the older widow who refused to get out of the car because she saw the Arlington lady standing near the grave. She assumed this was the other woman.

“You never know what to expect, and you never judge,” Willey says as she walks among the headstones and ponders her role. Willey, 63, who is married to a retired Air Force colonel, became a lady almost by accident, as a favor to a friend who kept pressing her. From her first funeral she knew that this was what she was meant to do.

“It just felt right, such an honor,” Willey says. “It’s such a simple gesture and yet it can be so powerful.”

As she talks, strains of “America the Beautiful” seem to float over the stones from a grave site a short distance away. Jan Jackson of Fort Collins, Colo., is burying her parents. Their urns sit next to each other on a table above their joint grave.

Jackson’s mother died in 2006 and her father, a retired Air Force lieutenant colonel, died last year. She had planned this springtime date on what would have been her father’s 96th birthday. She wanted to honor her parents, married 67 years, by burying them together in the nation’s hallowed ground.

As a member of a military family, Jackson, 59, is familiar with the pomp and precision and patriotism that accompany funerals. But she was utterly unprepared for the flood of emotion that swept over her as a young military escort took her arm and guided her from the chapel to the grave.

It was a small funeral — just Jackson, her son and grandchildren. And her Arlington lady.

Everything about the service was perfect, she said later. And this stranger was there to make it even better — “almost an angelic kind of person who is there for you even though she doesn’t know you, even though she is not required, even though it is not her job. It was so special, so comforting.”

From around the cemetery drift the sounds of other services, bands and gun salutes and drum rolls, one funeral seeming to blend into the next.

In one section, three daughters in black dresses and pearls, are burying their father, a former Navy officer who served in World War II, Korea and Vietnam, and who meticulously planned his own funeral, even visiting Arlington regularly to view his final resting place. He smiles from a photograph propped next to his urn.

In the Columbarium, decorated veterans, laden with medals, are saluting one of their own — a member of the naval aviation squadron known as the Golden Eagles, and one of the last survivors of the Battle of Midway.

And in Section 60 a widow, young and beautiful and dressed in black, clutches her toddler son. Before her, standing to attention, the honor guard that had processed behind her husband’s coffin, pulled in a caisson by six white horses. In the distance, the rifle guard that had fired the salute. In a far corner, the lone bugler who had played taps.

On this steamy spring day, beneath a towering oak, a 27-year-old Army sergeant, killed in an attack in Pakistan a month earlier, is about to be laid to rest.

“Today the country tries to say thank you … and yet words are inadequate,” the chaplain begins.

His widow seems overwhelmed, her eyes locked on the silver casket that holds his remains. His parents softly sob.

And then a lady steps forward, an older woman, dressed in a simple dark suit.

She whispers a few words of condolences and presses two cards into the widow’s hands.

“If there is anything you need …”

Copyright 2010 The Associated Press. All rights reserved. This material may not be published, broadcast, rewritten or redistributed.
URL: http://www.msnbc.msn.com/id/37416579/?GT1=43001

Go to my Blog