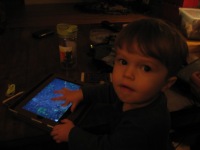 He is fortunate to have excellent parents that even though he is their first child and they are in their early twenties, were mature and aware enough to know something just wasn’t right with their son early on and availed themselves of every resource at their disposal to aid their son when by the age of 18 months he wasn’t talking and didn’t like to eat.
Logan started working with a Speech Therapist several months ago which helped lead to a diagnosis at this early stage.  Now with the official diagnosis, he will be able to start work with an Occupational Therapist and we have every confidence he will be able to “catch up” to his peers.
Logan is a sweet, loving child that is very bright (he figured out my iPad in a matter of minutes before he was 2) and well behaved.  With the proper therapy and education, we have no doubt that he will blossom under the care of his loving and devoted parents.  I don’t think a boy could ask for more loving and devoted parents than my brother, Greg and his wife, Valerie.  I love you guys!  Miss you!

We’ll still be 650 miles away after we move, but it’s alot closer than the 2200 miles away we currently are.  We’ll be able to see each other alot more and if you need us, we can be there in under 5 hours.  You better get a sleepaway couch for all the long weekends Aunt Kissytina will be visiting!
Autism Speaks, Be Informed, What is Autism, Facts