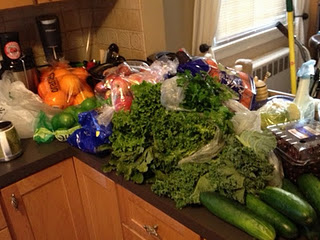 We just got home from the grocery store.  Ideally we would purchase all our produce from the South of the James Farmers Market, but since we are getting a few day jump on our New Years Resolution, most of the foods are out of season.

We are going to be focusing on mainly “green” juices as they are the most cleansing using carrots, apples and limes for flavoring.  We will be making fruit smoothies also, but only as a dessert type of drink since the sugar levels in fruit are very high.

We also have some almonds, flax seed and kefir (for thickening and for protein).

Jerry decided he wanted to try this after watching Fat, Sick and Nearly Dead on Netflix Streaming, I want to support him and lose some pounds, so I’m going to try it with him.

We have been eating much healthier since we moved and the reason for the move was a complete lifestyle change and “starting over” so we’ve had a few months to acclimate and now it is time to give it a boost!

I’ll update periodically to let you know how it’s going!!